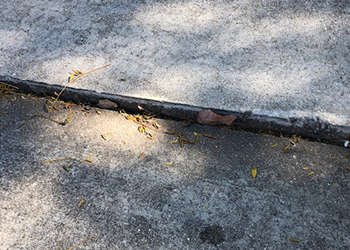 A 52-year-old client was walking on a sidewalk in the City of Yorba Linda in February of 2019 when she was caused to fall by a raised section of concrete. The elevated block of sidewalk was approximately 1” in height and located directly under a tree. The allegation on behalf of the client was that because of the color of the sidewalk, debris covering the change in elevation, the location of the defect (under a tree) and the lighting in the area of the sidewalk, the tripping hazard would not be reasonably apparent to someone exercising due care. In short, the claim in the lawsuit filed on behalf of the client was this area of the sidewalk constituted a “dangerous condition” of public property under law.

As a result of the fall, the client sustained a distal radius fracture, carpal tunnel syndrome, wrist pain, shoulder pain, a blackened eye, a bump on her head, and abrasions to her elbows and knees. Since there was no surgery needed to treat her injuries, her medical expenses totaled just over $5,400.00, and there were no lost wages claimed.

The lawsuit was filed against the adjacent property owner, the lessee of the property and the City of Yorba Linda. It was alleged that a tree on the adjacent property was the cause of the uneven sidewalk and that no steps were taken to warn of or remedy this condition. Additionally, it was alleged that the raised concrete slab had been ground down before the client’s fall, and that the defect was a known danger, even though there was no reported history of prior falls or accidents. After considerable litigation, which included overcoming the City’s motion for summary judgment (a formal request to the court that the case be dismissed), the case against all three defendants was settled for a combined total of $75,000.00.

A 17-Year-Old Client Was Allegedly Speeding

A 17-year-old client was allegedly speeding on a multi-lane roadway in north Orange County when a left-turning driver violated his right of way. The left-turning driver was actually facing a flashing yellow turn arrow when she decided to proceed. The result was a violent collision that sent the young man’s car careening into another vehicle that had yet to enter the intersection. As a result of the “t-bone” collision, the force of the impact was so severe that both cars were completely demolished and proved to be a total loss.

At the scene of the accident, the 17-year-old driver had to be extricated from his vehicle by emergency personnel. According to the Traffic Collision Report, he complained of pain to his back, left shoulder, left collar bone and right knee. He sustained a number of cuts and abrasions as well and was taken by EMS ambulance to UCI Medical Center for treatment.

While at UCI, the client underwent a number of diagnostic tests, including a chest film that revealed a right apical pneumothorax. A pneumothorax is an accumulation of air or gas in the pleural cavity, occurring as a result of disease or injury, resulting in a partial or complete collapse of the lung. Because of the nature and extent of the client’s injuries, he was kept at UCI Medical Center until the next day at which time he was discharged on pain mediation and instructed to follow up with his personal physician.

The partially collapsed lung resolved itself within a short time and this young man was back to school and playing soccer within just two weeks. The case settled for the defendant driver’s insurance policy limits of $50,000.00.

A nearly 50 year old woman living in the greater Los Angeles area used the bus system (MetroLine) for her daily travel to and from work. After she finished her shift as a hospital receptionist, she walked to the bus stop located just a short distance from her place of employment. As she attempted to board the bus, the bus driver suddenly closed the door, knocking the victim to the ground and pulling her into harms way. The would-be bus passenger ended up being crushed by the rear wheels, resulting in “degloving” of her skin and significant soft tissue loss, as well as broken bones in her legs and ankles.

In spite of witnesses who said the accident did not or could not have happened as described (some claiming the woman ran for the bus, slipped and fell under), the case settled for $1,000,000.00.

In the early morning hours, a 35 year-old truck driver was operating a tractor-trailer combination owned by his employer. While in the number 3 lane and as he approached the off-ramp for County Line Road, the truck driver’s vehicle struck the rear of another “big rig”, parked primarily along the shoulder but probably extending into the travel lane of the roadway.

In the evening before the accident, the driver of the parked truck had apparently experienced electrical problems with his tractor-trailer, making it ultimately inoperable. As a consequence, he parked his vehicle along the shoulder of Interstate 10 near County Line Road, but failed to place any reflectors or other warnings to the rear. He appeared to have every opportunity to warn other drivers of the presence of his disabled rig since reflector triangles were stored behind the seat of his tractor. At a minimum, the evidence in the case suggested that the driver of the disabled truck could have either properly placed the reflectors, driven his big rig off the highway at the nearest exit or parked completely out of the travel lanes.

It is important to note that the area where the accident occurred was “double marked” as to the white line establishing the outer edge of the roadway (between lane #3 and the shoulder). For some reason, that line of demarcation had been painted twice. Since both of the lines were still visible at the time of the accident, a driver could be confused about which line was actually the real edge of the travel lane. There was no artificial lighting near the location of the accident, which occurred just prior to sunrise.

When the front of the traveling rig struck the rear corner of the parked trailer, the impact with the fuel tank immediately resulted in a fire, and the victim was burned beyond recognition. The driver was survived by a wife and three children. Between the State of California and the employer for the parked operator, the case settled for a total of $572,000.00. 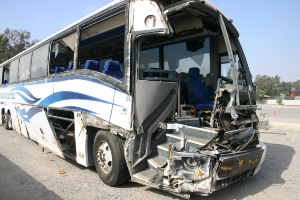 A charter bus that had been on a leisure trip to San Diego was heading northbound on Interstate 215, with a total of 24 passengers and the driver aboard, when it crashed into a wall. The majority of the passengers on board the bus were elderly and on their way back from a trip by a City in the Inland Empire. The firm's client was a City employee (recreation leader) in the course and scope of her employment when the accident occurred. She was seated near the front of the bus as the vehicle traveled north on the freeway.

According to the Traffic Collision Report, the bus driver had been operating the bus in a reckless manner prior to the happening of the accident and, even more importantly, after a sudden deflation of the right front tire. A witness to her driving just before the incident recalled seeing the bus traveling approximately 80 miles per hour while in the San Diego area. That same witness (who was following the bus in another lane) was so alarmed she contemplated calling 9-1-1. The bus speeds fluctuated between 70 and 80 miles per hour for some time, and once it merged onto the northbound 215, the bus pulled away and out of sight from the witness. Shortly thereafter, she drove past the accident scene.

From the investigation performed by the California Highway Patrol Multidisciplinary Accident Investigation Team (MAIT), the bus driver drove the bus over an object in the roadway causing a sudden tire deflation and delamination of the right front tire. Thereafter, a host of additional, nearly fatal mistakes were made by the driver, including but not limited to: making an unsafe turning movement, failing to promptly disengage the cruise control (set at 68 miles per hour), applying full throttle acceleration throughout the accident sequence and failing to apply the brakes at all. As a result, the charter bus struck a retaining wall, traveled over 700 feet along that wall and then into a block wall (at nearly a 45 degree angle) protecting a private residence. The firm's client suffered a skull fracture, broken arm and a number of serious internal injuries. In spite of the limits of the bus company’s insurance coverage, her lawsuit against the bus company was settled for $1,100,000.00.

The day after Christmas, the client (disabled from an earlier motorcycle accident) returned to his hotel from dinner with his family at a mountain resort.  Because of his previous accident, the client was entitled to use a red handicap placard (issued for a temporary disability) which was displayed in the window of his vehicle.  In spite of his best efforts, no handicap parking space could be found, and the client was forced to park some distance from the hotel where he was staying and in the uncovered parking.  The ground was covered with snow and ice at the time.

Shortly after getting out of his car, the client began to walk, along with his young children, toward his hotel but was caused to fall by the slippery, snow/ice covered asphalt.  As a result of the fall, he sustained a “distal oblique, displaced and rotated femoral fracture (left leg)” and was taken to the hospital on an emergent basis.  An open reduction and internal fixation procedure was performed the following day, December 27th.  Because of the extent of the injury and nature of the surgery, the client remained hospitalized until December 30th.

Evidence obtained by the client’s family (photographs actually taken the night of the fall) proved the majority of handicap parking spaces were occupied by vehicles that apparently belonged to other guests at the hotel, without the requisite handicap placards.  The Americans with Disabilities Act (ADA) proscribes discrimination in places of public accommodation against persons with disabilities. Businesses which do not provide adequate handicapped parking spaces are subject to potential liability under this Act.  The obligation to provide adequate parking not only requires the existence of a sufficient number of handicap parking spaces (relative to the total number available) but also that the business exercise due care in making sure only vehicles with handicap placards use such spaces.

Shortly after the filing of the lawsuit, the defendant hotel agreed to settle the case for $100,000.00.

The road to recovery starts here.